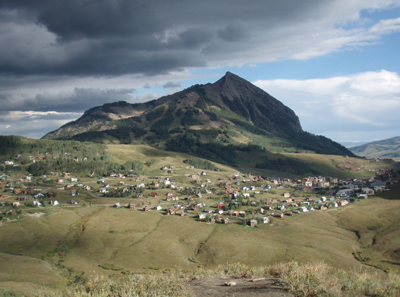 Johnny Biggers first moved to the Gunnison Valley when he enrolled in Western State College in 1979. Driven by his love for skiing, he worked as a ski patroller for Crested Butte Mountain Resort during the winters, while his wife, Janet, worked as an instructor. Johnny became active in the construction industry prior to his graduation from WSC in 1983, and continued to spend his summers working for some of the best builders in the area for the next several years.

His style of homes ranges from modern to mountain rustic, and from small renovations to 6000 sqft new homes. He has vast experience in historic renovations as well as new construction, and extensive experience building with reclaimed lumber. His success building quality custom homes in the Crested Butte area is highlighted by his many years in the trade, his favorability among subcontractors, his ability to communicate well with both homeowners and workers, and the high standards he brings to every job.
The craftsmen of Crested Butte Builders are dedicated to bringing you the best customer service by creating your finely crafted homes from unique, natural or antique materials. Your home will have a distinctive style that is reflected by your choices with the guidance of Crested Butte Builders.  The journey will be fun and rewarding! Come live the experience with Crested Butte Builders. Please browse our portfolio, and call Johnny today at 970.209.3261.

"Johnny and his team were a pleasure to work with from start to finish. As first time homebuilders we had no experience and lots of questions. Johnny handled every detail, helping us to create the space that we wanted. He and his team are thoughtful, innovative and very efficient. Our requests were always met with a "can do" attitude. We were rewarded with the house that is exactly as we imagined. We highly recommend CB Builders." -Homeowner, Hidden River Ranch

"After interviewing several builders who had been recommended to us by our architect and others in town, we selected Johnny Biggers and Crested Butte Builders to build our new house in Crested Butte. Not only did we like his approach to the project, we knew from our first meeting with Johnny that we could work well together. As second home owners, we were not able to be on site during the process, and the communication was excellent. The quality, finish, and craftsmanship was excellent, as were all of the subcontractors we worked with. We had such a good experience with Johnny that upon completion of our house, we immediately hired him to do a complete restoration of a 1890's log cabin in town. I guess that speaks volumes about Johnny, the quality of work he does and the enjoyment we had throughout the process." - Nora and Scott Murray.